Located along the Harlem river, River Park Plaza is a 4 Towers living community with 1700 apartments located in New York City. The project called for a complete renovation of all entry ways which also included tenant apartment doors- a total of 3000 doors were placed with re-rated doors and new hardware. The River Park Plaza project also included 1300 doors for stairwells, janitorial rooms, and basements which were also replaced with re-rated doors and new hardware. Installation, included new frames at designated location and reinforcement of doors by welding connecting joints. All 3000 installations on this project passed all required state inspections and met all regulatory standards. Parker delivered on it’s commitment, the project started in early April of 2013 and was completed mid June 2014.. on schedule, on budget and with the excellent workmanship that has come to be expected of Parker Custom Security. 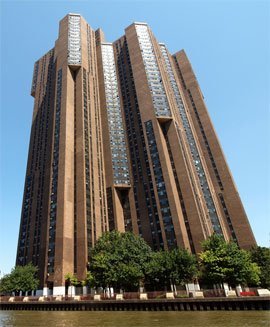